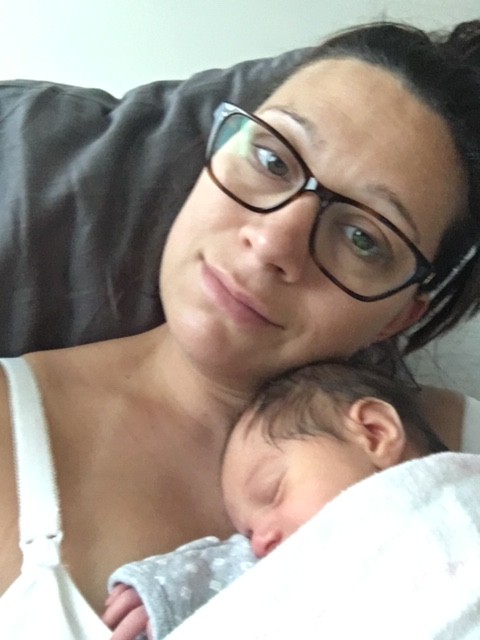 Breastfeeding your newborn is a personal choice, and I will never judge any women that prefers to go to bottle feeding immediately. Breastfeeding is painful, frustrating, and hard. The beauty of living in this day

Breastfeeding your newborn is a personal choice, and I will never judge any women that prefers to go to bottle feeding immediately. Breastfeeding is painful, frustrating, and hard. The beauty of living in this day and age, is that we have so many options, and we have a choice on how we feed our precious little newborn babies.  But, in any case, for me, it was important to do it. Even with my first born, 13 years ago.. And I have to say I was pretty stubborn about it.. I look back now and think “ Oh sweetie.. Sleep would have been worth giving him the bottle”. As a young mom with my first baby, I was determined to breastfeed. I was ready with my nipple cream and hand pump. I was looking forward to it so much, it never occurred to me that it wouldn’t work. In my own little naive way, I was thinking “I have boobs, therefore I have milk” but that was the furthest thing from the truth.

I had a pretty traumatic delivery with my first born. I won’t go into details because he’s old enough to read this and I don’t need to have to pay for his therapy..but I will say this for those mommas reading and that can relate.. 27 hours total..3 hours of pushing..almost an emergency c-section and then forceps..plus a 4th degree perineal cut…( Have you seen that video of Mother’s day that Amy Schumer did for SNL? No?.. totally worth it and when you see it think of me..)

Anyway, as usual, I digress.

Once we were home (I believe it was day 3 of his life), we noticed that something wasn’t completely right.  I still hadn’t had anything resembling “engorgement”

He was really sleepy on the breast and cried.. A lot. Feedings were taking over an hour, and happening every hour and a half. All day, and all night. But, being so young and inexperienced, I plugged through, supposing that this was maybe normal. Also, he had a lower birth weight than average, so we had to bring him to the CLSC to get weighed every day, and everyday it seemed he was losing more mass. (I’d say weight but the poor thing was skin and bones..)

At the time, the nurses didn’t understand why my milk wasn’t coming in, and they suggested every trick in the book to help me produce more milk. “Have you tried Fenugreek dear?” yes.. Yes I did.. I also tried tea, dark beer, hot showers, pumping with a rented double pump,before and after each feeding.. At all hours of the day and night.

I THINK I stayed optimistic?!? I do remember giving myself the same speech every night ( using the positive vibe mantra that I read about in the book The Secret. I would say to myself or to the night or really to anyone listening. “ Ok Tomorrow my milk will come in!” And yet, I never experienced that “engorgement” that I was continuously warned about. After four stressful and exhaustive weeks of supplementing via a tube (poor kids got poked in the eyes more often than I care to admit while we were trying to install it on my damn boob! Good thing he has no memory or else it would be very expensive therapy bills), extra pumping, and round the clock feeding, my son’s pediatrician prescribed me meds that would help increase my milk supply.  I didn’t know much about them at the time (like side effects, potential risks or weight gain) but they did the trick. Within a few days my supply was increased and I could breastfeed a bit better. I still didn’t produce enough to pump out extra, and my poor little guy still fed every 2 hours, until he was about 6 months old and we introduced cereals. That whole time is like a blur.. I remember my husband ( who helped when he could) was so tired that he held the cordless phone up to his ear and dialed his moms phone number on the microwave buttons!! Yea we had a good laugh with that one..hehe

Joking aside, Even though I was producing more milk with the medication, I still remember feeling inadequate. And I know I put that feeling onto myself, but I couldn’t help it.

It was a horrible feeling, not being able to feed my own child. My mom did try to convince me to bottle feed, but I was dead set against it, hoping that my breast would produce more milk by sheer stubbornness.

Looking back, I probably should have connected with a Lactation Consultant. But given our tight budget at the time, I figured that the nurses were good enough. Also, I was so tired of explaining my situation and taking advice from everyone with an opinion around me, I was done with asking for help.  By the time he was 8 months old, I was able to reduce the meds and feed him on top of real food.. I finally felt like it was going better! Unfortunately, I stopped at 10 months due a vacation, but it killed me to stop because it took sooo long for it to go well! (And it was my honeymoon so I really didn’t want to pump).. In any case, it kept me hopeful for when I got pregnant a year later with my daughter. Sadly, I had the same issues. Although this time, I had a toddler too so I couldn’t be up at all hours of the night trying to increase my milk supply by pumping.. So I decided to bottle feed with formula on top of breastfeeding. It eased the tension and stress, but I still couldn’t shake the feeling that I was a failure as a mom. I felt ashamed that I couldn’t produce enough milk for my children. I blamed myself. What I ate, how much sleep I had, how much water I drank.. I just couldn’t understand why it wasn’t working. I cried a lot..and I know I didn’t have postpartum depression, I was just overwhelmed and so frustrated that I couldn’t produce enough milk.

Unfortunately for me, at that time, the “condition” I had wasn’t well researched and/or talked about. Well not to me anyways. So for years I lived with the notion that I was somehow broken, or had something wrong with me.

Fast forward 11 years later and I have my third baby. Throughout my pregnancy, I thought often about my previous issues with breastfeeding and although it made me a bit worried, I was really hoping that it was my situation at the time that caused the low milk supply. Maybe it was because I was younger, and probably not as healthy as I am today? Maybe it was because we were financially strapped and the stress is what prevented my breasts from producing the milk my baby needed? But sadly, even though I was super fit and healthy going into this pregnancy, and not stressed out, I still had a very low milk supply. And with it, again, came a feeling of being a failure.  As with my first daughter, we supplemented, and I consoled myself with knowing that at least she was getting SOME milk from me. I pumped, took medications, and did everything I could to increase my supply.. To no avail.

Unfortunately,  with all the doctors, pediatricians, OBGYN’s and nurses that I have seen over the years, not ONE had mentioned that perhaps I had what’s called Hypoplasia. And here is what google has to say about; “Mammary hypoplasia, also known as insufficient glandular tissue or IGT, is a very uncommon condition that can cause low or no milk production. … Breasts do not grow or change during pregnancy, and milk never “comes in” around 3 days after giving birth.”

I love how it says “ VERY UNCOMMON”. ( Please note the sarcasm) Throughout the years I have spoken about my issues with other moms, and have found more than I can count on both hands who dealt with similar situations. Maybe it’s better known than I think..maybe I was just unlucky with whom I’ve dealt. In any case, if you feel like this is you, please know it’s not your fault. Ask your doctor if you could have this condition.. ( Please note that I am not in any way a doctor so please consult a physician if you have more questions).

Anyway, I’ll leave you with this; I have spent way too much time dwelling on the feeling of being a failure as a mom, and instead I should have been focusing on the positives. Like the fact that with formula fed babies, you can enjoy a glass of wine a bit more often, and your hubby can take some of the 3am feeds. It was a hard pill to swallow, not being able to breastfeed my kids 100%, or pump more than a few ounces.. but in end I had to do what was best for our baby to be healthy.  I managed to breastfeed until my daughter was 5 ½ months old, and even that was difficult given the amount of time I was pumping. I just couldn’t do it anymore. It was becoming too much for me, and I needed to stop, for my own sanity. Funny enough, it never occurred to me to research causes of low milk supply until just recently. I wish I had, I think it would have made the situation less overwhelming had I known that it was possible that my body just wasn’t ABLE to produce milk, no matter what I did.  SO this blog is for you other moms out there that may be going through this, or know someone that is.. I think we need to talk about it more, and take away the shame and guilt associated with it. I cannot possible be the only mom that went through this, or felt that way. It’s time to rise above the quiet shame that we secretly live in and TALK about these issue. We all need to have faith in the fact that we are all doing the best we can, and that should be enough. I can only hope that my experience helps someone else through theirs.