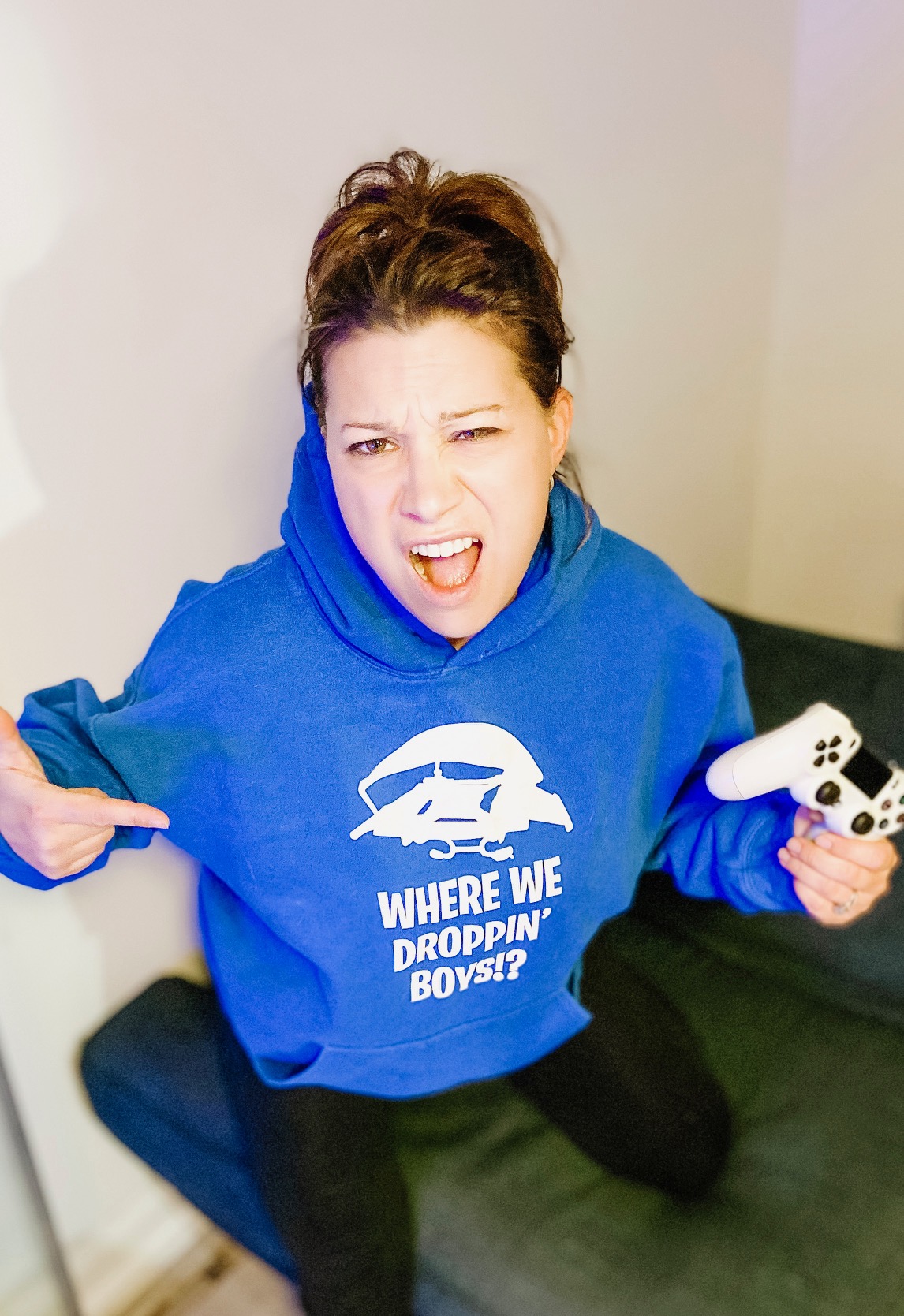 I may have mentioned before that I have a 13 (almost 14) year old boy. He is sweet, kind, caring, thoughtful and also extremely addicted  Ahem… passionate about Fortnite. If you have a boy (or

I may have mentioned before that I have a 13 (almost 14) year old boy. He is sweet, kind, caring, thoughtful and also extremely addicted  Ahem… passionate about Fortnite. If you have a boy (or girl!!) between the ages of 8 and 48 (hehe) then you probably know about this game. It’s taken the video game world by storm, since its debut in 2017. According to Business Insider, the game has welcomed over 250 million players and has earned more than $2.4 Billion from in-game microtransactions. Let’s put that into perspective, shall we?  Steve Jobs stake in the Apple empire is roughly $8 Billion. ..Within 2 years, Epic has made a quarter of that.

Just last week when they ended “Chapter 1”, they left millions of players wondering what was happening. My son begged us to be able to watch it day and night.

He followed other Youtubers, and other known players and streamers, trying to find hints on what was coming next. It was a special occasion so we gave him extra hours to see what was happening.

With all the excitement and buzz about it -It was trending on Instagram and Twitter!!- (and knowing how important this game is to him,) even Nick and I (and Kate!!!) were checking in every once in a while to see what was happening (Bravo Epic Games, Bravo! – talk about Marketing Genius!)

Typically though, his hours to play are pretty restricted.

I often hear other parents stating that they can’t get their kids off the consoles, but in all honesty, we haven’t had too many issues. He respects his time limits.  He might not like them, but he adheres to them.

He gets an hour after school, and one hour and a half at night. In between those hours he has to make sure he gets his homework done, and/or anything we might ask him to do around the house. On weekends we are a bit more lenient, especially if it’s raining or cold, and since he made the Honour Roll last year, and is in the running for it again this year, we don’t mind giving him a bit more time if he has earned it. (It’s actually a great tool for bribery…hehe) Joking aside, he knows that if he ever steps out of line, or gives us a reason to take it away from him, we would without hesitation. This works in our favour for sure, and as long as he doesn’t give me attitude, or even a hint of an eye roll when he’s asked to do something – then he gets to keep playing his favourite game. (I’d like to thank Epic personally for providing us with such an excellent bargaining tool!!)

In any case, I have been having some conversations with Rowen about why he loves this particular game so much, and if you are wondering the same about your own kids, then please read on!  Also, before I continue I’d like to mention that Rowen has a twitch account ( your kids will know what this is) and he would like to increase his subscribers. He is a great player and he doesn’t swear. A lot of guys that stream their games actually swear a lot, which is not cool. Unfortunately many gamers that do live videos are inappropriate for kids, not him. I can promise you that. He included the link to his account down below. But, hopefully his answers will help you understand the game a bit better too, and at the very least – will help you sound cool at the dinner table when you talk to your kids about it 🙂 Enjoy!

I asked him questions, and he wrote in his answers himself, my comments to his answers are in bold Enjoy 😉

Q- Fortnite is the biggest game right now, why do you think that is?

A- Well first off, it’s the most popular game because its unique to any other battle royal game (I have no Idea what that means but it seemed important to mention?) because you can build structures to protect yourself from getting shot. Also, every week they update the game to keep the community interested. So it’s not always the same thing.

Q- I hear that they include a lot of popular brands and people too? What have been your favourites?

A- Personally I like the football skins. When the Superbowl came out they had the players and I bought one and you can customize it to be any single player, so we chose for it to be Tom Brady.

Q- What is a battle pass?

A- It’s a pass that you can buy that will give you more skins/costumes to wear in game. This battle pass doesn’t give you any more of an advantages it just gives you more cool thing you can do. There are skins,dances/emotes and toys you can get. Every single battle pass is different.

Q- What is a season?

A- A season is when Epic games (the developers of Fortnite)  makes a new Battle pass, every season lasts about 70-77 days. You have to buy the battle bundles to get battle pass skins. In the time length of a season they do different events.

A-Twitch is a platform where you can live stream the game your are playing. Twitch is easy going platform for people that like talking, and playing games such as Fortnite. You have the option to have a microphone which means your viewers can listen to you. You can also install a face cam/camera so people can see you face. I would recommend to only use the face cam feature when you’re 18. ( Proud mama moment right here!) You can also make a living on twitch. Such as a famous Twitch streamer that goes by the name of Tfue. He makes an estimate of $112,500 per month. ( Are you KIDDING me?) With the feature of donating money he also makes around $100-$3000 dollars a stream.  Twitch also has a feature like Youtube to subscribe. Yet with Youtube you don’t need to pay anything. Twitch on the other hand you do, you can either link your Amazon prime account to Twitch or you pay for twitch prime to have the access of subscribing. If you subscribe you can get some exclusive stickers you can use in anyone’s live chat. You can also get OBS LIVE to help with organizing your twitch account.

A- I follow Tfue because he is a highly skilled player with a lot of different techniques you can use in different situations. Such oas ramp and high ground retakes.

Q- What is your ultimate goal with this? (Please say to strengthen your hand eye coordination and develop your cerebellum??)

A- My ultimate goal Is to make a little money since I can’t work yet and make people’s day and help them out with their problems. ( Well ok.. I mean.. Come on!! This kid is a charmer…)

Q- If they want to watch you stream, how do they?

A- All you guys have to do is to open twitch on you mobile devices or computer and search in Twitch rowmaster03. A faster way is to click on this link https://www.twitch.tv/rowmaster03.